Lammey’s observations were echoed by Champ Bailey and Jacob Tamme. Frankly, despite all the hand-wringing and circus drama that surrounded his surgeries and recovery, it is not surprising that Manning is able to do in May 2012 what he was unable to do in December or January. 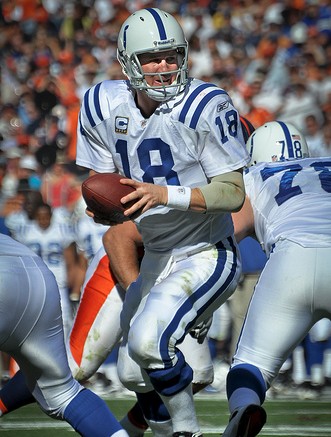 Peyton Manning was impressive during OTAs yesterday. Can it last? (photo by Ed Clemente Photography)

Dr. Robert Bohinski, a neurosurgeon with the Mayfield Clinic in Cincinnati who specializes in cervical fusion procedures like the one Manning underwent, told me that while there are differences in every case the usual recovery time for this procedure is around six months. Manning’s cervical fusion was performed in early September. The Zapruder-esque video of his “aggressive” throwing session at Duke in early March occurred just shy of six months after his procedure, and his on-field performance yesterday is further evidence of a recovery that falls in line with expectation.

While that will undoubtedly help quell the fears of Broncos fans, it does not mean that the spinal issues that have plagued Manning for the past few seasons are behind him. A comment in a February article by Don Banks at SI.com – and not the debate that followed over whether Manning had three or four neck surgeries in a year and a half – is worth revisiting.

In addition, league sources say Manning’s neck has potentially developed bone spurs just above the point where his latest fusion surgery took place in early September, and the Colts organization is under the belief that it is nearly inevitable Manning will at some point require further surgery, and possibly another fusion procedure, even if he does successfully return to the field in 2012.

According to Dr. Bohinski, “Fusion completely eliminates…friction forces in a bad spinal joint and makes it impossible for a new [bone] spur to form.” The newly developed bone spurs would form at a different point in the spine than where the fusion was done. It’s reasonable to conclude that the “just above the point” means the next cervical level up from his fusion.

Why is that important?

Bone spurs are a symptom of degenerative disc disease. They grow when a disc space narrows and the spinal bones rub against each other. A bone spur may not cause pain and won’t be the sole cause of another herniated cervical disc. But the presence of bone spurs suggests a “sick” disc space that could herniate with further wear and tear.

Recovering from another cervical disc herniation would be difficult for Manning. If his symptoms progress to the point where another fusion is recommended, his career will be over. While it’s considered safe to play contact sports with one cervical joint fusion, most spine surgeons would be hesitant to clear a player with two levels fused.

I want to see a fully healthy Manning under center for the Broncos this year. I’m not saying that another herniation and fusion is certain or even likely. The Broncos surely did more than due diligence. And it should be noted that Banks wrote “potentially developed” at a time where the public relations battle between Manning and the Colts was near its highest point.

But I think there’s reason to look at Manning’s situation with a critical eye. Any sudden or gradual evidence of decline in Manning’s arm strength should — and will — invite questions about the health of his spine.