The Injury-Prone Player: Perception vs Reality 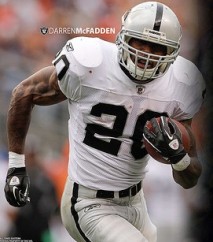 Is Darren McFadden injury-prone? Unlucky? Both?
Photo by RMTip 21

Athletes frustrate us for many reasons. Inconsistent performance. Off-field issues. Failure to reach potential. But the inability of some players to stay healthy for a full season is as maddening to coaches and fans as any on- or off-field frustrations.

Coaches sometimes openly complain to the media that a player is taking longer to return than expected. Injured players confidently predict that they’ll beat the most optimistic return to play estimates. In the tough guy culture of the NFL, no one wants to be labeled fragile or injury-prone.

But is that label fair? Are some players more prone to injury than others? Can injury-proneness be quantified? Can it be predicted?

Consider this quote from Carl Foster, the director of the human performance laboratory at the University of Wisconsin, Lacrosse, taken from a 2008 New York times article on injury frequency:

I think that there is a general quality of ‘heartiness’, or ‘robustness,’ that may influence who gets hurt and who doesn’t. I’ve never seen any systematically collected data, and I’m not even sure what one would measure, but anyone who has worked with athletes for any time at all has seen that there are just some people who are fragile and some who aren’t.

On the surface, Foster’s argument makes lots of sense. It’s obvious that some players establish a pattern of being injured more often than others. But, as Foster acknowledges, the argument is mostly anecdotal. There’s no hard predictive science. While it may be clearly evident that a player has been prone to injury, it doesn’t necessarily follow that the same player will be prone to injury in the future.

Yet, many use the injury-prone term prospectively rather than retrospectively – and at times, I think, unfairly.

To be certain, we can identify many objective reasons why a player who has a history of injury may be more prone to future injury. It’s reasonable to consider players in the following categories as more likely to suffer an injury.

There are undoubtedly many others. But, in many of those cases, quantifying the related level of injury-proneness is difficult, if not impossible. Even if you could – and there are some making an effort to do just that – there’s still more uncertainty in how to apply those findings to predict and prevent injury.

Could DNA someday be used to quantify injury-prone players? That’s a loaded question.
Photo by micahb37

Demarco Murray suffered a dislocated kneecap as a freshman at Oklahoma, then had hamstring injuries and a knee problem in future seasons at OU, before missing time in camp as a rookie with a hamstring strain. Is that list of injuries sufficient to call him injury prone? Is it reasonable to think his conditioning and strength have improved from what it was between 2007 (age 19 season) and 2010 (age 22 season)? How many other running backs would’ve broken their leg if tackled in the same way Murray was last season?

Michael Vick has had multiple chest injuries, some with body armor, some without. He’s also had multiple hand injuries. Does his playing style put him in position to suffer more severe injury – including other areas than his chest and hands? Will the new body armor help? Are there now changes in his sternum and rib cartilage (or throwing hand and fingers) that may make him less likely to withstand another hit in the same area?

No matter how you answer any of those questions, it’s difficult to put a percentage on the chance that either Murray or Vick suffers an injury that keeps them out for any length of time. I can assess probabilities – i.e. I’d be much more worried about Vick than Murray – but they’ll be based on pattern recognition and style of play rather than any scientific, biomechanical measure.

Are certain players injury-prone? Almost certainly. Can you predict which players may be more injury-prone than others? Probably. Can you reliably predict whether a player will suffer an injury in any given week, month or season? Good luck – especially if you’re unable to make a precise argument based on one of the above factors.