What’s Ahead for Robert Griffin III

Robert Griffin III had reconstructive knee surgery this morning to repair his LCL and ACL. The surgery was successful, according to Dr. James Andrews, and involved a “direct repair of his LCL and a re-do of his previous ACL reconstruction.”

Though Dr. Andrews confirmed the details of the injury and surgical procedure in his statement, a number of questions remain. 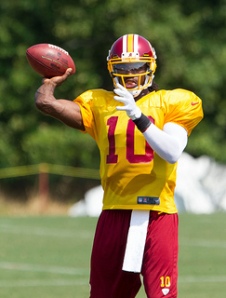 What can Robert Griffin III expect in the coming weeks and months? (Photo by Keith Allison)

How did Griffin aggravate his LCL sprain and sustain a catastrophic ACL injury while playing in a protective brace?

This question deserves more attention than it’s getting in the media. Shortly after his injury, the Redskins said they would not allow Griffin to play until his knee was no longer at risk of an aggravation or additional injury. That proved not to be the case, since there would be no reason for Griffin to play in a brace if there were no concerns about the stability of his knee.

Injuries to the knee happen in multiple ways. The LCL is most commonly injured when the knee is stressed from the side. The restrictive, hinged brace that Griffin was wearing is generally very good at stabilizing the knee against another blow to the inside of the knee. The ACL is often injured by a rotational stress, which is very difficult to prevent with a brace, especially the kind of brace Griffin was wearing last weekend.

An orthopedic surgeon I spoke with today told me that it would be unusual for a braced LCL to fail. Further, he felt that Griffin’s final play didn’t have the look of an acute injury. More specifically, he felt that Griffin’s knee buckled in such a way – non-contact but low velocity – that it was the final manifestation of an already compromised knee joint.

Whether Griffin’s LCL sprain was a higher grade than reported, had already been re-injured, or Griffin’s previously repaired ACL graft was already damaged is impossible to say. But the way in which the knee buckled in a brace that wasn’t meant to protect against the rotational stress against the ACL may help explain why Griffin suffered such a severe injury while braced.

Is Griffin at higher risk of another future ACL injury because the ligament has now been reconstructed twice?

This is a complicated question. Those of you following the story closely have seen the differing opinions on this question (and the discussion on how soon Griffin may be able to return to play).

The short answer is yes, Griffin is at higher risk, but it’s a risk that is difficult to quantify.

I spoke to the same orthopedic surgeon about the challenges of repairing a previously reconstructed ACL graft. When an ACL is reconstructed, tunnels are made into the thigh and shin bone to serve as anchors for the graft that will serve as the new ACL.

Though there are concerns with the graft having less blood supply than a natural ACL, the graft usually anchors well and the bone tunnels fill in without issue after a new reconstruction. With subsequent reconstructions, those tunnels must be larger and a different method of anchoring the graft is often necessary. Larger tunnels require more bone grafting and a slightly different angle for the graft. Those factors can cause the reconstructed ACL to loosen over time. That, in turn, leads to a higher risk of failure.

The good news is that the risk is not terribly high and is lessened by Griffin’s young age and the rehab protocols available to an elite NFL athlete. Thomas Davis, a linebacker with the Carolina Panthers, is an interesting comparison. Davis suffered a graft failure soon after returning from his first ACL tear but is now playing well after his second reconstruction.

Just how soon could Griffin return to the field? Is 6-8 months a reasonable estimate?

Estimates for Griffin’s return to play ranged from 6-8 months to 8-10 months to 10-14 months this weekend. Dr. Andrews did not give a specific estimate today, saying only that “it’s everyone’s hope and belief that…he will be ready for the 2013 season.”

Andrews’ statement and other sources are implying that Griffin does not have any injuries to the structures to the posterolateral corner (PLC) of his knee (more on PLC injuries in this post on Fred Jackson’s LCL injury) and that his procedure was able to be performed arthroscopically. Unless Griffin has an unexpected setback, he’s very likely to hit the more optimistic side of reported estimates.

Though the dual ACL/LCL injury is worrisome, both grafts should heal at the same rate and can be rehabbed together. With the now common accelerated rehab schedule for reconstructive knee surgery, 8-10 months is a reasonable expectation. I’m not aware of a clear NFL comparison, but the NBA’s Ricky Rubio recently returned to practice about nine months after a dual ACL/LCL reconstruction. Griffin will have different issues to face as a mobile quarterback in a higher contact sport, but the rehab comparison is notable.

Can Griffin return as quickly and effectively as Adrian Peterson did in 2012?

This may be the most common question I’ve seen today. It’s possible that Griffin can match Peterson’s superhuman recovery from his ACL/MCL/meniscus injury. But it’s unlikely.

Peterson’s associated MCL and meniscus injuries were no cakewalk, but there’s still reason to be worried about Griffin’s LCL injury if there are any unreported associated PLC injuries. Also notable is the state of Peterson’s knee prior to his reconstructive surgery. Dr. Andrews termed Peterson’s joint “pristine” – save the ACL, MCL and meniscus tears, of course – and likened it to that of a newborn baby. That is not likely to be the case with Griffin’s knee, which has undergone one ACL reconstruction and the stress of playing on a partially torn LCL for multiple weeks.

Most importantly, don’t mistake Peterson’s dramatic early return for a new norm in ACL recovery. Though it’s true that a total knee reconstruction is no longer a 12-18+ month injury, neither should an athlete be presumed to recover to full pre-injury form in six months.

Griffin has an excellent chance at a full recovery and it’s possible that he’ll be off the PUP list in time for the first week of the 2013 season. But it’s best to temper your expectations for the first month of 2013, even if his recovery and rehabilitation go smoothly.